Most Solar parks are ground mounted PV systems, also known as free-field solar power plants. They can either be fixed tilt or use a single axis or dual axis solar tracker. While tracking improves the overall performance, it also increases the system’s installation and maintenance cost.A solar inverter converts the array’s power output from DC to AC, and connection to the utility grid is made through a high voltage, three phase step up transformer of typically 10 kV and above.

The solar arrays are the subsystems which convert incoming light into electrical energy. They comprise a multitude of solar modules, mounted on support structures and interconnected to deliver a power output to electronic power conditioning subsystems.

A minority of utility-scale solar parks are configured on buildings and so use building-mounted solar arrays. The majority are ‘free field’ systems using ground-mounted structures, usually of one of the following types:

Many projects use mounting structures where the solar modules are mounted at a fixed inclination calculated to provide the optimum annual output profile. The modules are normally oriented towards the Equator, at a tilt angle slightly less than the latitude of the site. In some cases, depending on local climatic, topographical or electricity pricing regimes, different tilt angles can be used, or the arrays might be offset from the normal East-West axis to favour morning or evening output.

A variant on this design is the use of arrays, whose tilt angle can be adjusted twice or four times annually to optimise seasonal output. They also require more land area to reduce internal shading at the steeper winter tilt angle. Because the increased output is typically only a few percent, it seldom justifies the increased cost and complexity of this design. 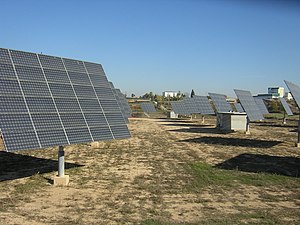 To maximise the intensity of incoming direct radiation, solar panels should be orientated normal to the sun’s rays. To achieve this, arrays can be designed using two-axis trackers, capable of tracking the sun in its daily orbit across the sky, and as its elevation changes throughout the year.

These arrays need to be spaced out to reduce inter-shading as the sun moves and the array orientations change, so need more land area. They also require more complex mechanisms to maintain the array surface at the required angle. The increased output can be of the order of 30% in locations with high levels of direct radiation, but the increase is lower in temperate climates or those with more significant diffuse radiation, due to overcast conditions. For this reason, dual axis trackers are most commonly used in subtropical regions, and were first deployed at utility scale at the Lugo plant.

A third approach achieves some of the output benefits of tracking, with a lesser penalty in terms of land area, capital and operating cost. This involves tracking the sun in one dimension – in its daily journey across the sky – but not adjusting for the seasons. The angle of the axis is normally horizontal, though some, such as the solar park at Nellis Airforce Base, which have a 20° tilt, incline the axis towards the equator in a north-south orientation – effectively a hybrid between tracking and fixed tilt.

Single axis tracking systems are aligned along axes roughly North-South. Some use linkages between rows so that the same actuator can adjust the angle of several rows at once.

Solar panels produce direct current (DC) electricity, so solar parks need conversion equipment to convert this to alternating current (AC), which is the form transmitted by the electricity grid. This conversion is done by inverters. To maximise their efficiency, solar power plants also incorporate maximum power point trackers, either within the inverters or as separate units. These devices keep each solar array string close to its peak power point.

There are two primary alternatives for configuring this conversion equipment; centralised and string inverters, although in some cases individual, or micro-inverters are used. Single inverters allows optimizing the output of each panel, and multiple inverters increases the reliability by limiting the loss of output when an inverter fails. 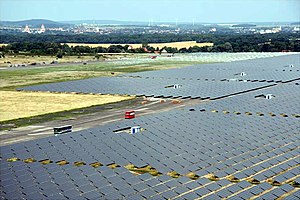 Waldpolenz Solar Park is divided into blocks, each with a centralised inverter

These units have relatively high capacity, typically of the order of 1 MW, so they condition that the output of a substantial block of solar arrays, up to perhaps 2 hectares (4.9 acres) in area. Solar parks using centralised inverters are often configured in discrete rectangular blocks, with the related inverter in one corner, or the centre of the block.

String inverters are substantially lower in capacity, of the order of 10 kW, and condition the output of a single array string. This is normally a whole, or part of, a row of solar arrays within the overall plant. String inverters can enhance the efficiency of solar parks, where different parts of the array are experiencing different levels of insolation, for example where arranged at different orientations, or closely packed to minimise site area.

The system inverters typically provide power output at voltages of the order of 480 VAC. Electricity grids operate at much higher voltages of the order of tens or hundreds of thousands of volts, so transformers are incorporated to deliver the required output to the grid. Due to the long lead time, the Long Island Solar Farm chose to keep a spare transformer onsite, as transformer failure would have kept the solar farm offline for a long period. Transformers typically have a life of 25 to 75 years, and normally do not require replacement during the life of a photovoltaic power station.

The performance of a solar park is a function of the climatic conditions, the equipment used and the system configuration. The primary energy input is the global light irradiance in the plane of the solar arrays, and this in turn is a combination of the direct and the diffuse radiation.

A key determinant of the output of the system is the conversion efficiency of the solar modules, which will depend in particular on the type of solar cell used.

There will be losses between the DC output of the solar modules and the AC power delivered to the grid, due to a wide range of factors such as light absorption losses, mismatch, cable voltage drop, conversion efficiencies, and other parasitic losses. A parameter called the ‘performance ratio’ has been developed to evaluate the total value of these losses. The performance ratio gives a measure of the output AC power delivered as a proportion of the total DC power which the solar modules should be able to deliver under the ambient climatic conditions. In modern solar parks the performance ratio should typically be in excess of 80%.

Early photovoltaic systems output decreased as much as 10%/year, but as of 2010 the median degradation rate was 0.5%/year, with modules made after 2000 having a significantly lower degradation rate, so that a system would lose only 12% of its output performance in 25 years. A system using modules which degrade 4%/year will lose 64% of its output during the same period. Many panel makers offer a performance guarantee, typically 90% in ten years and 80% over 25 years. The output of all panels is typically warranteed at plus or minus 3% during the first year of operation.